After a day of sightseeing, many wish for nothing more than a good meal and time to relax. Others want to take in a concert or a gig and dance the night away. Either way, experiencing the vibe of city nightlife is a great way to get a feel for the local culture.  For those who want to see all sides of their destination, it’s a must.

Whatever your taste, most European cities can provide some pretty decent evening entertainment.  Some have more of a reputation for a lively nightlife than others.  Are you looking for a city that offers a vibrant and diverse experience after dark?  Here are our choices for the best European nightlife.

Spanish cities consistently lead the charge in terms of nightlife, with a cheerful party scene that lasts until dawn.  Of these, hip and fun Barcelona is the cream of the crop.  This colourful city offers everything from massive dance clubs to intimate indie hangouts.  Start the evening by sharing tapas and wine with your friends.  Then head on to some of the city’s trendy bars or cosy, atmospheric pubs.  Finally, hit the clubs after midnight when the fun really begins. 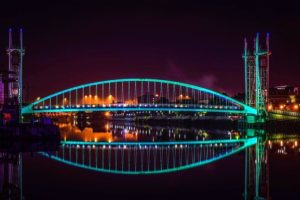 While most people visiting the UK tend to party in London, Manchester’s eclectic urban appeal (and lower prices) make it another prime contender for Britain’s best nightlife.  The northern city is famous for its dynamic and influential music scene.  Bands such as The Smiths, Joy Division, and The Stone Roses all have roots in the city’s legendary 1980s Madchester scene.  Later bands such as Oasis continue this world-class tradition.  Many tourists still travel to Manchester specifically for gigs and other performances.  This makes it the perfect destination for those who enjoy cutting-edge live music alongside pubs and cocktail bars.

Many people name Berlin among the best cities in the world for nightlife.  This is due to its eclectic array of edgy bars and hip nightclubs throughout the city.  There’s truly something here for every taste, ranging from the elegantly stylish to grungy and laid back.  Try the areas around Kastanienallee, Prenzlauer Berg or Mitte for excellent bars, restaurants and clubs.  Speak to a local or pick up one of the city’s “what’s on” magazines to find the most happening places.  Remember that while people will be out earlier in the evening, most clubs won’t start to fill up until after midnight. 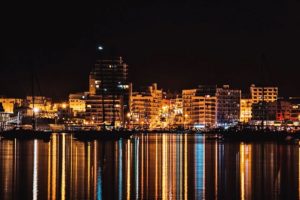 No discussion of European nightlife would be complete without mention of what many consider the ultimate party destination.  Yes: Ibiza.  A small but bustling Mediterranean island just off the coast of Spain, it’s famous for nightlife.  Although the island possesses a rich history and numerous UNESCO World Heritage Sites, Ibiza remains known for its young and sometimes riotous club scene.  In recent years, the island has seen big name DJs and performers.  However, there is also a lively underground arts scene popular with locals and tourists alike.

There’s a sense in Amsterdam that anything goes.  Indeed, the Dutch capital is famous for its tolerance toward pleasures considered illicit elsewhere.  As a result, tourists from all over the world descend on the city to experience or observe its marijuana cafés and famous red light district.  Even if you’re looking for a more mainstream good time, the city’s easygoing attitude means there’s always a party going on somewhere.  Visitors are welcome to the local scene.  Check out the areas around Rembrandt Square and Leidseplein for a good place to start.

If you are looking to buy timeshare, sell timeshare or rent timeshare, let Travel and Leisure Group guide you safely through sometimes murky waters.