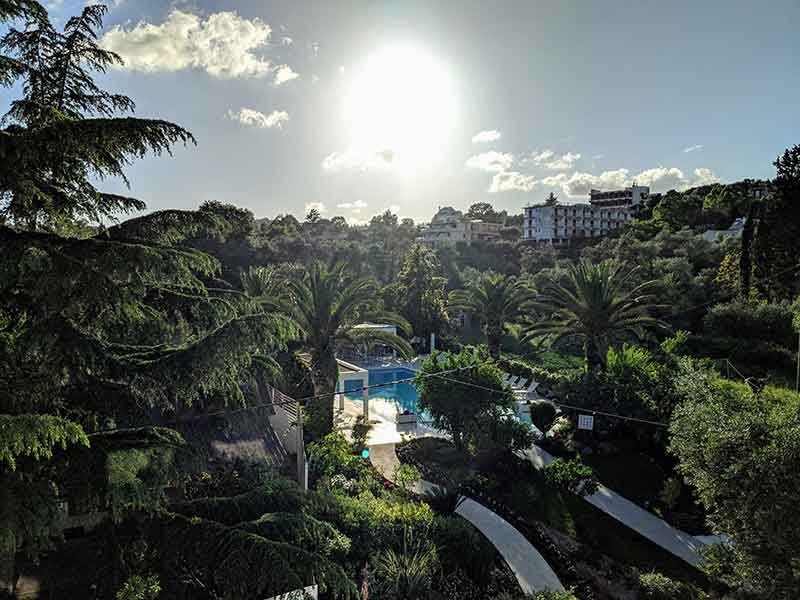 Corfu in Greece is steeped in mythology and there is so much history associated with this island.

• Duke of Edinburgh, the husband of Queen Elizabeth of England was born in Corfu.
• Corfu is the second largest Greek Island in the Ionian Sea
• There are at around 800 churches and monasteries in Corfu
• The predominant religion in Corfu is Greek Orthodox
• In ancient times the island was called Corcyra
• Kerkyra is the modern Greek name for Corfu
• Olive trees, figs, oranges, lemons, grapes, and corn are all grown on the island
• It states that the first settlements on Corfu island date back to 775-750 BC
• Greece is home to many timeshare resorts

This time our company globetrotter Adam travelled to the Island of Corfu in Greece with another member of our staff at Travel & Leisure Group, Buyers Manager, Gavin Brown. 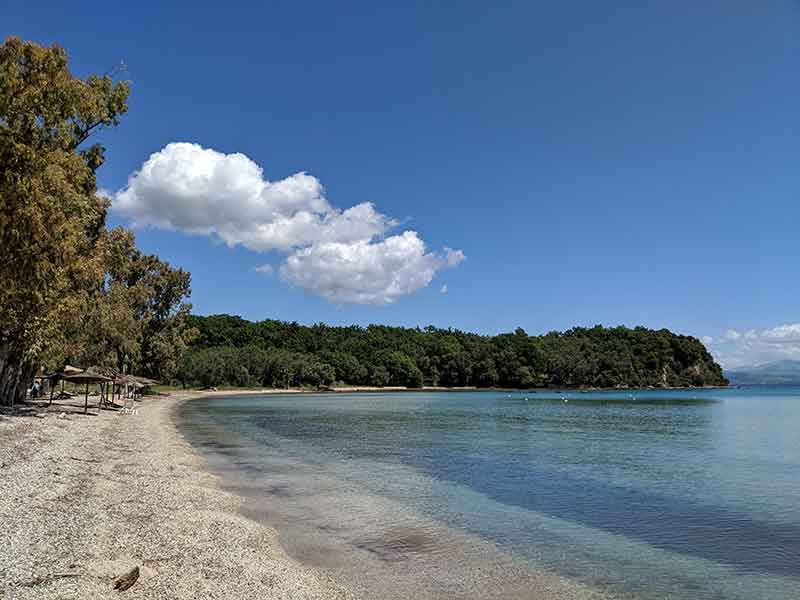 TLG: A short flight time of just over 3 hours from Stansted to Corfu, it must be nice not to have a long flight this time?

AL: In a way yes, but we were flying with Ryanair and I’m not a fan of their service! It’s supposed to be a budget airline, but you basically have to pay for add-ons just to get what you require, such as taking carry-on baggage and the seat you want. Also they often have delays, so it was a means to an end more than anything.

TLG: You went with Gavin on this holiday, what made you choose Corfu?

AL: Gavin has previously been to Corfu and kept saying how much he enjoyed it. He had already booked the trip and said there was room for me in the hotel, so I agreed to go with him as I have not been before and always like to visit new countries.

TLG: Gavin what was the attraction of going back there again?

GB: Corfu is a beautiful island and very green with breathtaking scenery. 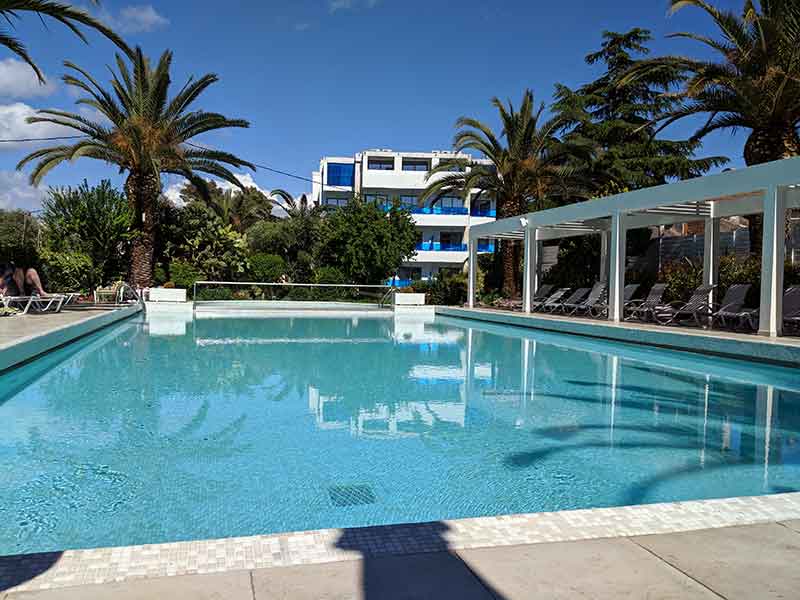 TLG: Gavin did you return to the same location, where did you stay.

GB: We stayed in Dassia.  It was my third time visiting.

TLG: Adam did it match the great reviews that Gavin boasted about?

AL: The area we stayed was situated about 20 – 30 minutes away from Corfu City and around 20 minutes from Kerkyra airport. It was a very nice hotel, with great food, attentive and friendly staff and overall a very good place to stay, also close to the beach.

TLG: Corfu is a very old island and has so much Greek history about it. Did you get out and see some sites, if so where did you visit? Gavin you have been to Corfu before, did you recommend any sites?

GB: Previously I took a day trip over to Butrint in Albania to see its UNESCO listed ancient Greco-Roman ruins. At the last holiday I enjoyed touring the the old fortress of Corfu.  It is a Venetian fortress in the city of Corfu. The fortress covers the promontory which initially contained the old town of Corfu that had emerged during Byzantine times. 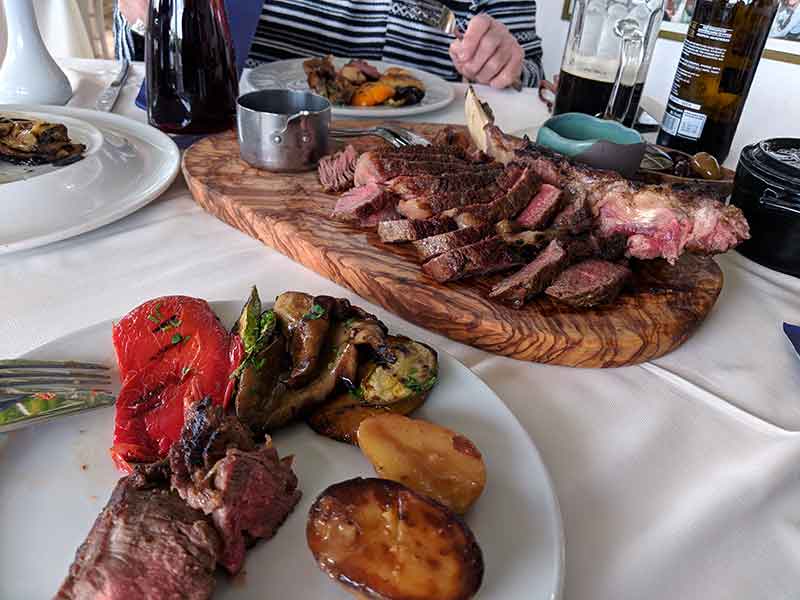 AL: There was a tourist operator with car hire next door to the hotel, Helga Holidays. We travelled to surrounding areas such as Kalami (where the Durrell Family White House is located), where we had some fantastic BBQ ribs, Kassiopi and some ruins at Palea Peritheia. The highlight of the trip was a visit to mainland Greece, where we had a tour of the monasteries in the sky at Meteora. Although a long round trip via bus and ferry, it was a real sight to behold. Up there with some of the best views I’ve experienced throughout my world travels.

TLG: Also let’s ask about the food, Gavin as you used to be a chef, did the food meet your very high standards? give us a taste of what you ate?

GB: Well of course fresh grilled fish was a must and there was one terrific restaurant in Ipsos on the seafront which served amazing dishes. It was called Moby Dick and we had a lovely meal there. We also tried various Greek lamb dishes which certainly matched up to my standards of cooking.

TLG: Adam you are a well travelled person and you love to try new foods and you like spices, how did you find the Greek food?

AL: We ate well for sure as Gavin said, there was sea food, pasta and of course Greek food as well as many other types of cuisine. On our final night we ate at Rex Restaurant in Corfu City, which was excellent. I must admit, I missed the Asian flavours I am so fond of, but I was a nice change and always top quality. Of course, we drank plenty of alcohol as well! 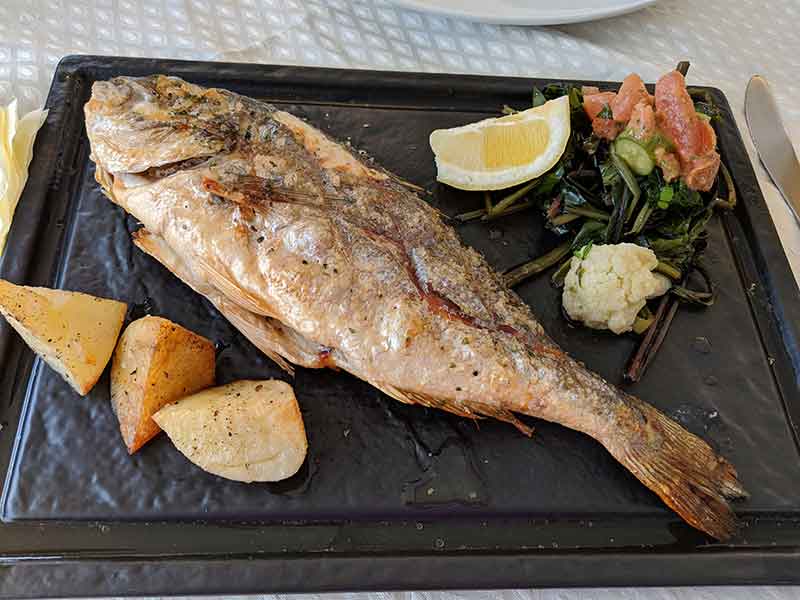 TLG: Did you both get any time to chill out and relax?

GB: Certainly. Lounging by the swimming pool bar at the hotel and sampling various alcoholic beverages served by Aris. We also relaxed at the indoor bar in the evening enjoying amazing cocktails served to perfection.

AL: We took a few days in between excursions to relax by the pool. Although it was low season, for the most part, the weather was excellent. On the few days there was some rain, we had already planned it as down time, so it worked out perfectly!

TLG: Do you have any funny stories of this trip?

AL: There is one story I could mention, but what happens in Corfu, stays in Corfu! Haha.

TLG: Would you both recommend Corfu as a travel destination? Any plans to go back soon?

GB: Certainly. Lounging by the swimming pool bar at the hotel and sampling various alcoholic beverages served by Aris. We also relaxed at the indoor bar in the evening enjoying amazing cocktails served to perfection.

AL: I would recommend it for anyone who has not been before. I didn’t expect there to be as much to see and do as there, if you also take into consideration the ferry to mainland Greece. As I like to travel to different destinations each time I go away, I doubt I will be back in the near future, but would certainly consider it again. 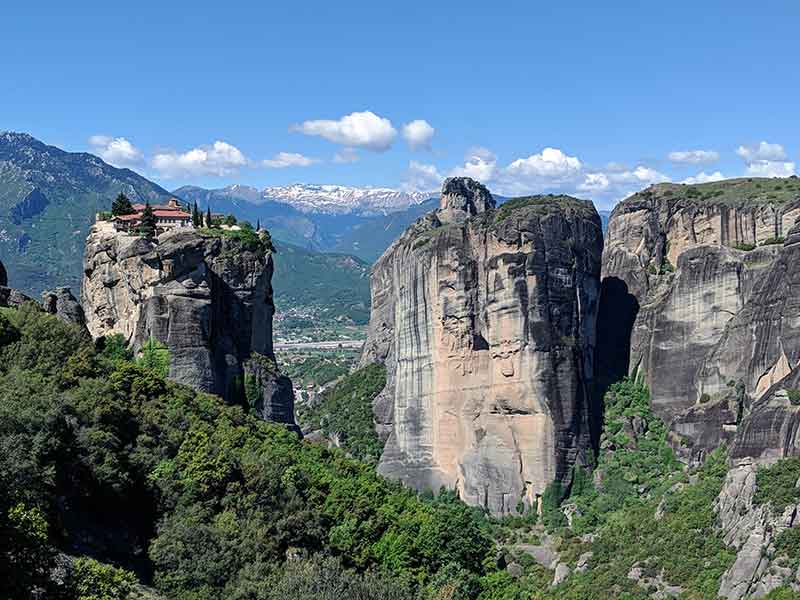 Corfu: It’s About Making A Memory

GB: Thrashing the restaurant manager, Aris at chess on a large outdoor board. I will never forget his face when suddenly I performed checkmate.

AL: The trip to Meteora, Greece –  the ‘monasteries in the sky’ were a real hidden wonder of the world. Destroying Gavin 8-2 at pool (even the games he won were dubious, haha!) was also fun.