Mina the Orangutan by Georgina Fairley 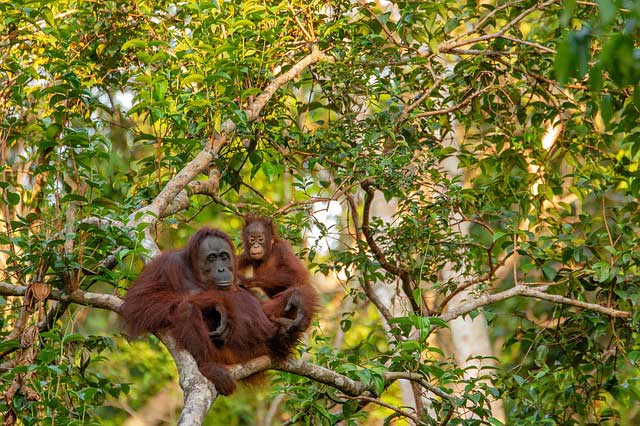 Indonesia 2002….deep in the jungle at Bukit Lawang ape rescue and rehabilitation centre.

That was a truly amazing day, the best, damn trek ever. As always, the avid combination of fear and excitement win every time.

We had started nice and early with our guide. His real name was ‘Yetno’ but, he was known affectionately as Ronaldo due to his strong physical resemblance to the Brazilian hero. The going was good. With every step the excitement of seeing an orangutan grew stronger, sadly several hours in to the trek and still no glimpse. We were all beginning to wonder if it would be a disappointment after all. Then, all of a sudden Ronaldo catches a glimpse of something. He calls our attention and much to our delight a mother and little furry baby sit together a few metres away!

As they have been rehabilitated in the centre they were not scared. We had the honour to stand and watch them for over an hour. A lone male is nearby too, but it is the babe and her mother that take my full attention. My mind winds back to my school days. I remember a religious education lesson. The teacher was asking us to define the difference between humans and animals. He insisted that animals don’t feel love in the same way we do. I didn’t agree. I was convinced that love was universal and knew no boundary of species. The teacher had claimed that mothers protected their young through instinct alone. I am sure that he had never witnessed the sight of a mother ape and her baby. They were so wrapped up in their own love that they hardly even noticed their spellbound audience. It was perfect.

We dragged ourselves away with extreme reluctance and began the arduous walk home, happy.

I was heading the group. Shortly before reaching the camp, I spotted something in the trees ahead. It was another one! It seemed pretty far off but I made out the gingerbread tones against the verdant rainforest. I pointed and turned to the guides to get their attention. But, by the time I had turned back, the creature was a lot closer and this one didn’t look calm, moving at quite a rate towards me, the mouth set in what I can only describe as a determined grimace, swinging through the trees systematically, making alarming progress right towards me. The guide shouts: ‘Run its Mina!’ Everyone turns and begins to run in the opposite direction to where we had come from, putting me right at the back of the group, with the crazy ape right behind me. It was up hill, and incredibly hard going in the heat. The adrenaline fuelled us. The thought that she was just behind me pushed me up that hill. At times she must have been within a few feet of reaching out her strong orange arm and knocking me to the floor. Orangutans may be small but, they are incredibly strong, weigh on average of one ton and can pretty much rip you apart if they desire. Ronaldo is behind me now, slowing ‘Mina’ down by throwing bananas at her! An ear splitting cry pierces the chaos: ‘Gooooooo quickly….’ We all absolutely storm it now at the other side of the hill, tearing down this incredibly steep hill, desperate not to lose our footing and fall into her welcoming arms…

They manage to fend her off. And we reach the safety of the camp, incredibly relieved, dripping with sweat and exhausted.

We all sit, collapsing slightly into the earth while they tell us the sad story of Mina the Orangutan, affectionately known to the locals as: ‘Queen of the jungle.’

As an infant she has witnessed the murder of her own mother by illegal poachers. She had been rescued and rehabilitated at the centre. Some-time after her release into the jungle, she had her own baby and that baby died. She was carrying the dead baby ape around with her which was probably part of her own natural grieving process. The trainers had seen it as unhealthy so decided to take her baby away. She got mad. Since then she has had another baby. She doesn’t want to lose this one. Experience has taught her not to trust humans, and her and her species have good reason. The WWF report just 104,700 Orangutans are left on the planet. This is due largely to destruction of their habit by Palm Oil farmers, with the demand for this cheap product increasing, the deforestation prevails. Battles have been fought for years between protesters, indigenous people, and the Brazilian government regarding who has claim to this land. Highlighted most recently in the conflict surrounding who or what is behind the devastating forest fires currently raging through the precious Amazon.

So were Mina’s actions born from instinct or love? I have been in love and now that I have children I understand that, different form of love. A love with a lion’s heart that would fight to the death, to keep my own babies safe, a love that knows no boundaries of species or boundaries of effort, as strong as it is soft. As most mothers and fathers reading this, I recognise that same love that I have experienced in Mina.

I bet when her and baby are alone they are lost in their own special bubble: Unbreakable, formidable, strong and raw.

Mina the Orangutan was a mum who had lost. She would have done anything to keep her new baby. She was so scared of losing what she loved, again. She was terrified of the pain returning, the pain we feel when love dies.

I remember her with excitement, respect and admiration, and I re-tell this tale often. It was absolutely one of my favourite travelling experiences. The time, that I came so close to nature and pure love, that it almost tore me apart.