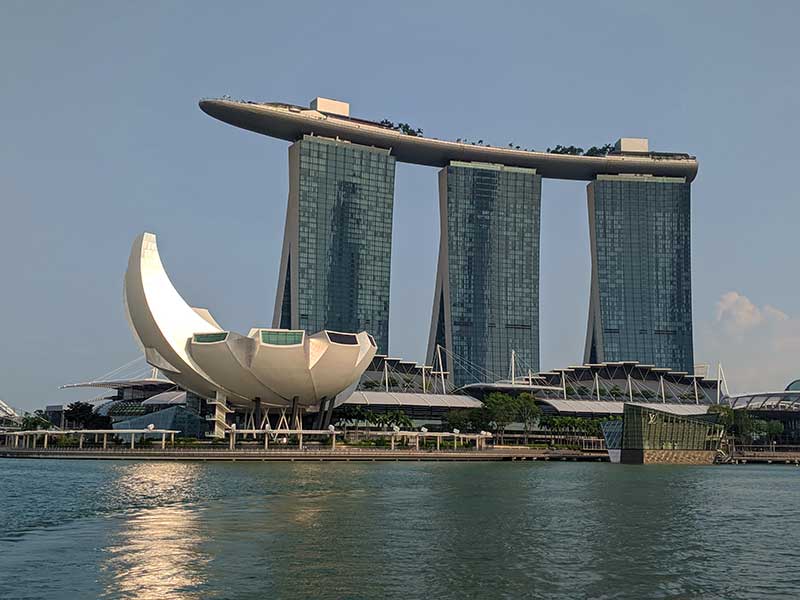 In the second part of Adam’s one week marathon mini break, he travelled from Kuala Lumpur to Singapore. Flying into the breathtaking Jewel Changi Airport, which has the world’s tallest indoor waterfall!

Here are some interesting facts: 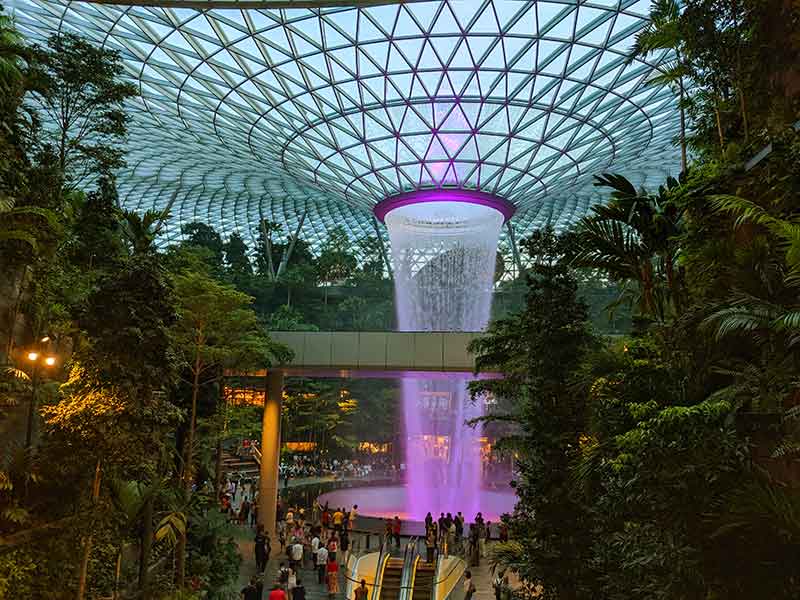 TLG: How did you travel from Kuala Lumpur to Singapore?

AL: We took a short flight with Jetstar Asia which took about an hour all in. It was also very cheap, under £20 if I recall, we made the booking at the same time as the long haul flights. Very reminiscent of easyJet, but for Asia.

TLG: Tell us a bit more about Jewel Changi Airport, it looks a fantastic sight to see!

AL: We didn’t actually visit Jewel in Singapore airport until our departure. It is actually separate from check-in and security, being connected to the Arrival Hall of Terminal 1. As we entered the complex, the first thing we saw was the amazing waterfall. It is surrounded by vegetation and walkways connecting the various floors. When you get to the top floor you can pay to use the glass walkway. Neither myself or Lee were brave enough to do this though as we both suffer from fear of heights! There is also a cinema, gym, swimming pool, fashion shops and many restaurants, to name a few attractions. We settled for some Vietnamese cuisine at So Pho. Usually airport restaurants are not really up to the grade, but the quality here was as good as anything you’d find in the city. In fact is was easily the best airport I have been to in all my travels. On the last day of a holiday, you often feel like you just want to get home and the airport departure is a real hassle. On this occasion, I would wholeheartedly recommend getting there early, there is so much to see and experience, it really helps you relax before you depart. 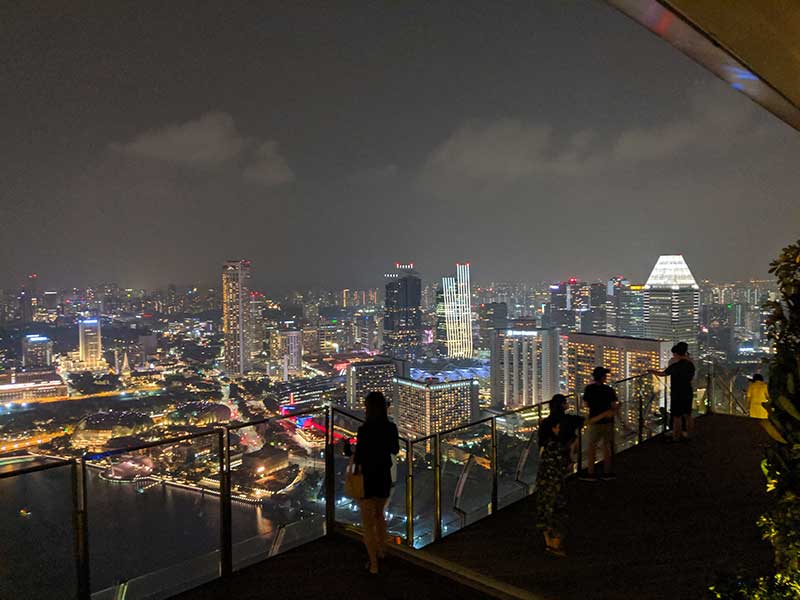 TLG:  How many days did you stay in Singapore?

AL: We were there for almost four days, travelling back to the UK in the evening of the fourth day. We took the opportunity to spend some time in the Jewel Changi Airport to see the attractions and have dinner there before our long flight home.

TLG: Tell us about your time in Singapore. Where did you go, did you sample the nightlife?

AL: When travelling this kind of distance we always like to take in as much as we can. We arrived early afternoon and it was pouring with rain. Knowing it was rainy season I assumed that this would be our lot for the next four days. Fortunately, like Kuala Lumpur, the rain cleared not long after we arrived at our hotel and we had glorious sunshine throughout the duration of the stay. We stopped off for a bite to eat at the reasonably priced Chin Chin Eating House before moving on to explore our new surroundings. We met up with a friend of Lee and Chris and had some food and craft beer at SG Taps and then onto Clarke Quay to enjoy the rest of the evening.

The following day Lee went off to do some exploring on his own, whilst Chris and I headed to Sentosa to check out the attractions there. When we arrived the first thing we did was head to Skyline Luge which was great fun. We then went exploring the “island”, first heading to Siloso Beach Front which was beautiful. Of course it was very hot, so we stopped off for a quick beer at the Bikini Bar before heading to the Fort Siloso Skywalk for a great view. There was a complimentary bus that took visitors around various stops on the island, so we used it to get around and finished off at the Merlion Statue. All in all, a great afternoon out and there was plenty more to do than we saw, but with the heat you would probably be best off spending all day there and taking it slowly. 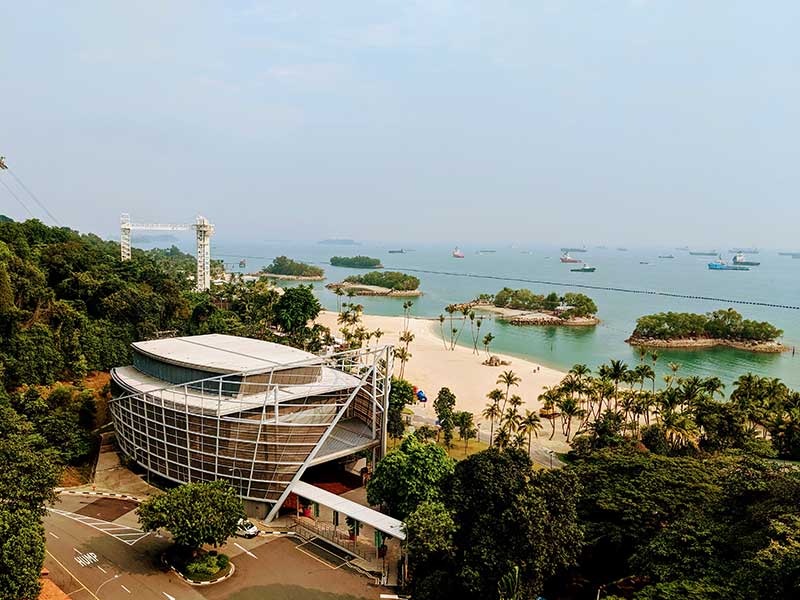 In the evening we headed to Marina Sands Bay to head up to the famous rooftop bar of CÉ LA VI. The view was breathtaking and being that high up the temperature was also much cooler. It was a real experience, though expensive. Other notable excursions were the Singapore Cruise, which took us from Clarke Quay on a 45 minute roundabout journey through some fantastic locations. We also took in Chinatown and Little India, so there’s plenty to see and do.

TLG: Was this your first visit to Singapore?

AL: It was, I noticed how clean the city was and also how hot and humid it was as well! Going out in the evening and night was much more pleasant, as the sun wasn’t beating down on us and it was much more manageable. There are two things about Singapore you should know, both accommodation and alcohol are expensive. We stayed in a budget hotel, which was very minimal, but probably about a quarter of the size of the room we had in Kuala Lumpur and about three times the cost! Similarly alcohol is very expensive, for example a pint of beer worked out around £8-12 per pint! The Singapore government have placed what is known as a “sin” tax on alcohol to make is harder to drink to excess and in an attempt to keep social stability. 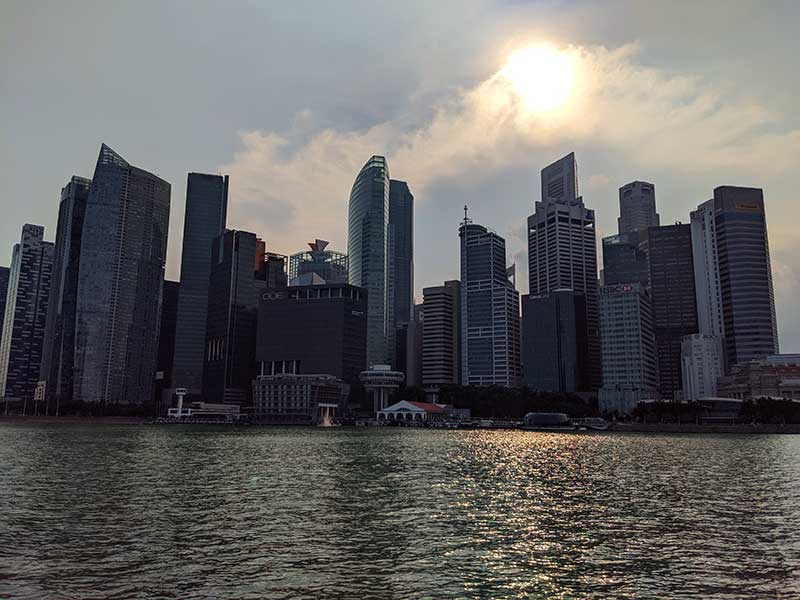 Singapore: It’s All About the Memories

TLG: What were the best moments of your time in Singapore?